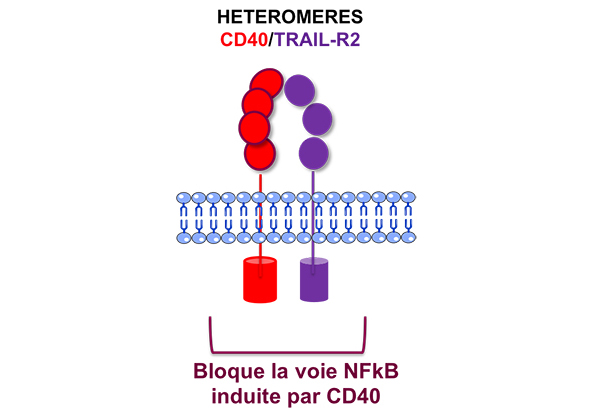 TNF receptor superfamily members (TNFRSF) such as CD40, Fas and TRAIL receptor 2 (TRAILR2) participate to the adaptive immune response by eliciting survival, proliferation, differentiation and/or cell death signals. The balance between these signals determines the fate of the immune response. It was previously reported that these receptors are able to self-assemble in the absence of ligand through their extracellular regions. However, the role of this oligomerization is not well understood, and none of the proposed hypotheses take into account potential hetero-association of receptors. Using CD40 as bait in a flow cytometry Förster resonance energy transfer assay, TNFRSF members with known functions in B cells were probed for interactions. Both Fas and TRAILR2 associated with CD40. Immunoprecipitation experiments confirmed the interaction of CD40 with Fas at the endogenous levels in a BJAB B-cell lymphoma cell line deficient for TRAILR2. TRAILR2-expressing BJAB cells displayed a robust

CD40–TRAILR2 interaction at the expense of the CD40–Fas interaction. The same results were obtained by proximity ligation assay, using TRAILR2-positive and -negative BJAB cells and primary human B cells. Expression of the extracellular domains of Fas or