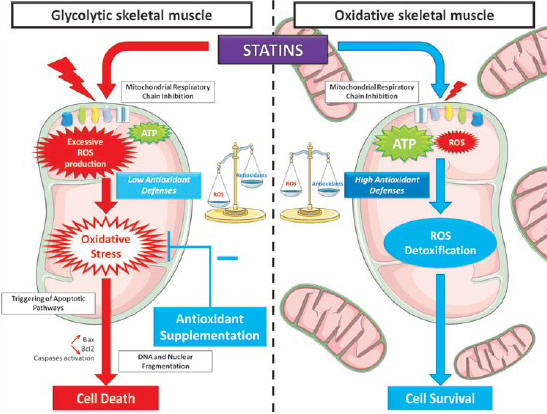 Aims: Although statins are the most widely used cholesterol-lowering agents, they are associated with a variety of muscle complaints. The goal of this study was to characterize the effects of statins on the mitochondrial apoptosis pathway induced by mitochondrial oxidative stress in skeletal muscle using human muscle biopsies as well as in vivo and in vitro models.

Results: Statins increased mitochondrial H2O2 production, the Bax/Bcl-2 ratio, and TUNEL staining in deltoid biopsies of patients with statin-associated myopathy. Furthermore, atorvastatin treatment for 2 weeks at 10mg/kg/day in rats increased H2O2 accumulation and mRNA levels and immunostaining of the Bax/Bcl-2 ratio, as well as TUNEL staining and caspase 3 cleavage in glycolytic (plantaris) skeletal muscle, but not in oxidative (soleus) skeletal muscle, which has a high antioxidative capacity. Atorvastatin also decreased the GSH/GSSG ratio, but only in glycolytic skeletal muscle. Cotreatment with the antioxidant, quercetin, at 25 mg/kg/day abolished these effects in plantaris. An in vitro study with L6 myoblasts directly demonstrated the link between mitochondrial oxidative stress following atorvastatin exposure and activation of the mitochondrial apoptosis signaling pathway.

Conclusion: There is a link between statin-induced mitochondrial oxidative stress and activation of the mitochondrial apoptosis signaling pathway in glycolytic skeletal muscle, which may be associated with statin-associated myopathy.